Media redundancy is primarily used to avoid single points of failure in industrial communication networks. If a failure occurs on a redundant structure, the network falls back to a secondary state in which communication is still viable, and repair can be made to restore the system to the previous fault-free state. Ethernet technology does not allow physical loops, as they cause packets to circulate endlessly and overload the network. This means providing media redundancy within an Ethernet network requires the use of a protocol that is able to monitor and resolve the physical loops introduced by redundant pathways. This protocol must ensure that, even with multiple physical pathways to any device, only one is activated at any one time and the remaining are in standby mode. This is achieved by: monitoring links, detecting interruptions, and switching to an alternative path in the event of failure as soon as possible. Media Redundancy Protocol (MRP) is a protocol for providing redundancy in Ethernet networks via a ring. MRP is specified for ring networks with up to 50 devices. It guarantees fully predictable switchover behavior.

Ring ports can be in one of three states:
The ring  itself  can  be  in one of  three states:
During  normal operation,  one of  the MRM’s  ring  ports  is  blocking, while  the other is  forwarding. This puts the network  in  a  closed  state, where  the physical  ring  topology  is  in  a ring  structure,  and at the logical level is  in  a  linear  structure.  The  MRM sends MRP_Test  frames  (at  a  predetermined interval)  out both its  ring ports.  These will be forwarded around the  ring by the MRCs until they again reach  the  MRM.
In the case of a transmission failure  (for example, a ring port  becomes disabled), the MRM will fail to receive  its test frames.  After a  predefined number of test  packets are lost,  it will set its  blocking  ring port  to  forwarding.  This  enables  the  secondary network  path,  and puts  the  network in  an  open state  where  both  MRM ring  ports  are  forwarding.

Veryx ATTEST™-CTS Media Redundancy Protocol (MRP) automated test suite provides Equipment Manufacturers, an easy and efficient solution for the verification of MRP in Industrial Ethernet Switches. ATTEST enables significant speeding up of testing cycles and reduces the “time-to-market”.
Veryx has devised about 111 test cases that comprehensively test for MRP compliance. These test cases have been grouped into 8 convenient test groups based on the IEC specifications for each category of functions.
ATTEST MRP test cases verify the MRP support for: 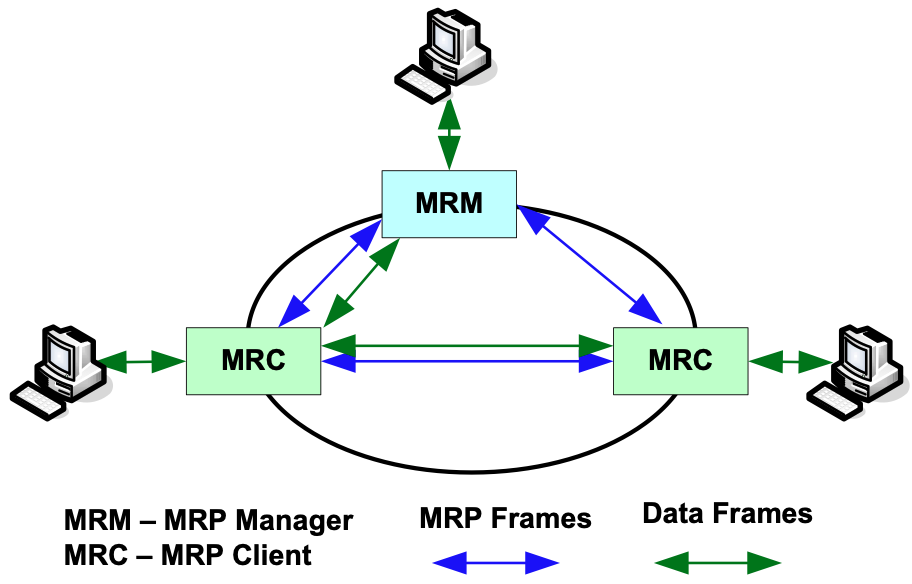